Helping Others by Donating and Volunteering
Study

Nearly 64 percent of Israelis aged 20 and older help others by donating money or by volunteering, with 59 percent donating money and 21 percent volunteering. The following study examines the connection between the two types of assistance – are they complementary or alternative, and is there a difference in the extent of the correlation between these activities in each population group in Jewish society?

The different population groups in Israeli society exhibit big differences between the patterns of helping others, especially within Jewish society. In haredi society there are much higher rates of donating and volunteering than in the other population groups, with 89 percent of haredim reporting monetary donations and 38 percent being involved in volunteer activities. In the rest of Jewish society, the rate of volunteerism and donating rise in direct correlation to the level of religiosity.

The study found a positive correlation between donations and volunteering among all the population groups: volunteers tend to donate in greater ratios than non-volunteers, and donors volunteer more than non-donors. The likelihood that a person will donate both his time and his money rises with his level of religiosity, with the highest rates of giving and volunteerism being in haredi society. Haredi society also has the highest ratio of donors who are not volunteers. A summary of all the reciprocal relations indicates that the strongest correlation between monetary donations and volunteering is in non-haredi religious society, in which donating and volunteering go hand in hand as more complementary activities than among the other population groups. 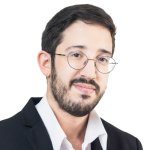